Rabbi A. James Rudin is the American Jewish Committee’s senior interreligious adviser and the author of “Pillar of Fire: A Biography of Rabbi Stephen S. Wise.” He can be reached at jamesrudin.com.The views expressed in this commentary do not necessarily reflect those of Religion News Service.

It has been 400 years since “20, odd Negroes” in chains arrived aboard the English ship “The White Lion” in Point Comfort, Virginia, in August 1619. A short time later, a second ship, “The Treasurer,” brought more Africans to be sold to the white Virginia settlers who had arrived in Jamestown a dozen years earlier.

Transporting Africans by ship across the Atlantic Ocean as slaves did not end until 1808, and scholars estimate about 455,000 Africans — including children — were brought to what became the United States. Besides being sold as property, the Africans were also stripped of their original names, languages, cultures and religions. Most slaves were forcibly converted to Christianity, their masters’ religion.

Christian scholars, like the late David L. Bartlett of Yale Divinity School, have since reinterpreted such verses. “… We cannot take 1 Peter as a clear and infallible guide to contemporary faithful behavior,” Bartlett wrote in 1997. “Our understanding of slavery has changed.”

But long before Bartlett wrote such words, fearful white masters had little thought of changing their “understanding of slavery,” and armed with weaponized New Testament verses, masters frequently prohibited slaves from conducting their own Christian worship services. The slave owners feared religion could provide inspiration for a slave revolt. 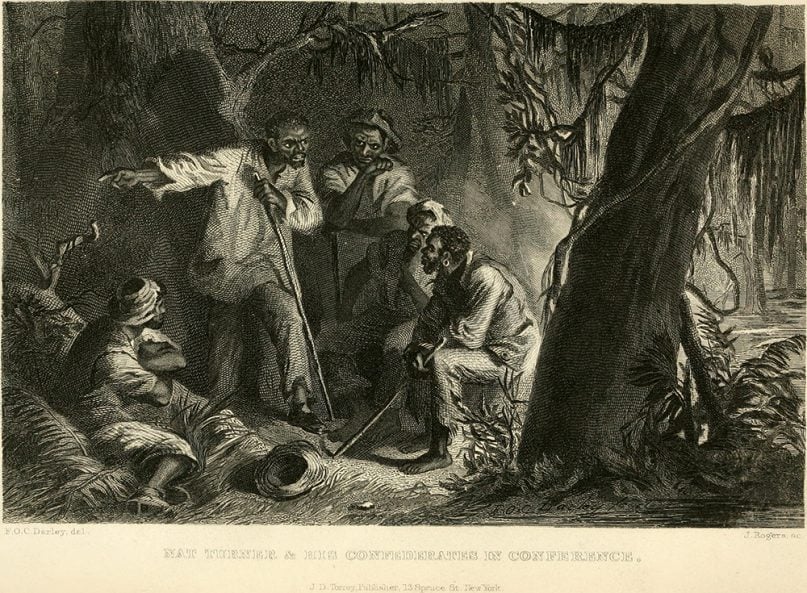 “Nat Turner and his confederates in conference” from an 1863 book. Image courtesy of Creative Commons

And they were right to worry. On Aug. 21, 1831,  Nat Turner, a minister who knew the Bible, led a rebellion against white slave owners in Virginia. He spoke about “white spirits and black spirits engaged in battle … and the time was fast approaching when the first should be last and the last should be first.”

Turner’s uprising killed 55 white people and was quashed. But the slave insurrection frightened the white ruling class. Nine years earlier, President James Monroe, a Virginia slave owner, had helped establish Liberia in West Africa as an independent nation for the growing number of freed slaves in the United States. It is no accident that Liberia’s capital is named Monrovia.

But, of course, the human quest for liberation can never be fully extinguished. Turner may have failed with his rebellion, but African-American slaves used the teachings of the Hebrew Bible to sustain their spirit and hope during long years of human degradation.

Not surprisingly, they turned to the Exodus story of Hebrew slaves breaking free from Pharaoh’s cruel rule, leaving Egypt and wandering 40 years in the wilderness before triumphantly entering the Promised Land.

In a brilliant spiritual maneuver, the slaves in the American South, many of whom were forbidden to learn to read, heard their spiritual leaders, often women, orally relating the gripping story of Moses leading slaves to freedom.

That biblical account presented a real and present danger to white slave masters. But they were unable to prevent the Exodus story from being used as the dream, the hope and the unstoppable force that drove slaves toward freedom.