A new document by Pope Francis slams countries and companies exploiting the Amazon region and calls on the Catholic Church to find new paths and methods to minister to its indigenous people.

But those new paths do not include the ordination of married men to the priesthood in the region.

The document, called “Querida Amazonia” (Beloved Amazon), is born from the discussions of over 180 bishops from all over the world who gathered at the Vatican last fall (Oct. 6-27) to address the social, environmental and spiritual needs of the indigenous people of the Amazon and their habitat.

During their meeting, bishops had suggested in their final document that the pope consider the ordination of tested married men to minister to the remote areas of the Amazon forest sprawled over nine Latin American countries.

Bishops had also voted to further discussions on female deacons, which would allow women to preach, distribute the Eucharist and officiate at weddings, baptisms and funerals.

Pope Francis’ document doesn’t make any mention of the ordination of married men and of women, which is consistent with the efforts made by the Vatican to downplay expectations ahead of its publication. In January, former Pope Benedict XVI published a book with Cardinal Robert Sarah, who heads the Vatican department for liturgy, making a case for the importance of celibacy in the priesthood.

“Querida Amazonia” is divided into four chapters, each corresponding to a “dream” of the pope on the social, cultural, ecological and ecclesial aspects of the Amazon. It includes numerous poems by indigenous people detailing the beauty — and destruction — of the Amazon. 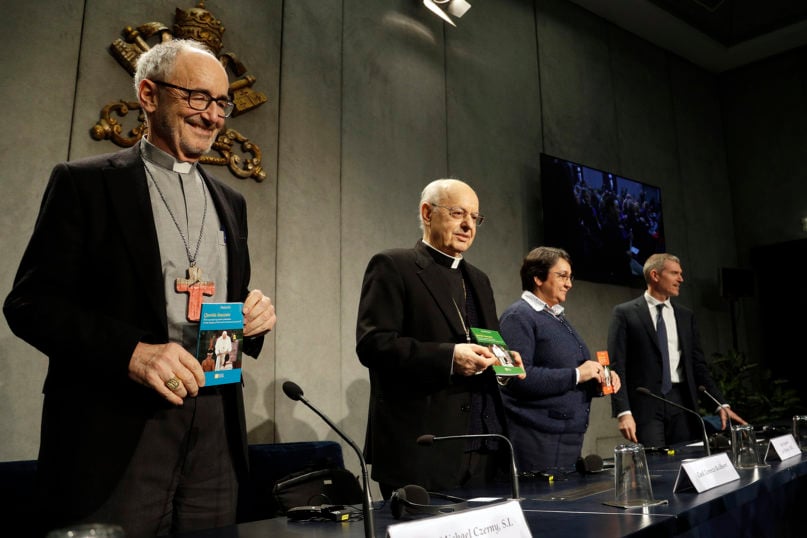 The papal document encourages Catholics and all people of goodwill to protect the environment, accompany the diaspora of indigenous peoples and stand up against injustice and reckless exploitation.

During colonization, the people of the Amazon forest “were considered more an obstacle needing to be eliminated than as human beings with the same dignity as others and possessed of their own acquired rights,” Francis wrote.

“The businesses, national or international, which harm the Amazon and fail to respect the right of the original peoples,” he wrote, “should be called for what they are: injustice and crime.”

Colonization has left tremendous wounds in the Amazon, the pope said, but colonization continues today even though it is “changed, disguised.”

“The interest of a few powerful industries should not be considered more important than the good of the Amazon region or humanity as a whole,” he warned.

Francis admitted that while missionaries were among the few who stood up to defend the rights of the Amazon and its peoples, the Catholic Church also bears its responsibility and its members were “part of a network of corruption.”

“I express my shame and once more I humbly ask forgiveness, not only for the offenses of the Church herself, but for the crimes committed against the native peoples during the so-called conquest of America as well as for the terrible crimes that followed throughout the history of the Amazon region,” he said.

In a section addressing forms of ministry, the pope called for “a specific and courageous response” to the shortage of priests in the Amazon. Though ordaining married men is out of the question, at least in this document, the pope encouraged bishops to take matters into their own hands.

“This urgent need leads me to urge all bishops, especially those in Latin America, not only to promote prayer for priestly vocations, but also to be more generous in encouraging those who display a missionary vocation to opt for the Amazon region,” he wrote, putting an emphasis on the need to overhaul priestly formation.