(RNS) — People who want a green burial will soon have a new option: having their body turned into compost.

Recompose, a Washington state-based company that has pioneered human composting, announced Tuesday (Aug. 18) it is now accepting prepayment for people who would like to begin making those arrangements for themselves or loved ones.

The company will begin accepting bodies in November. Those remains will be transformed into soil.

As part of the plan, resultant soil will be donated to the Bells Mountain conservation forest in the state of Washington. Family and friends, however, can also choose to take home the soil.

The costs include death certificate filing and the opportunity for a virtual ceremony facilitated by staff. Transportation of the body from anywhere in King, Pierce and Snohomish counties of Washington state to the Recompose facility is also covered.

People outside of Washington state can sign up but would need to separately pay for transport of the body.

Here’s how human composting works: A dead body is broken down through a process known as natural organic reduction by placing the body in a reusable vessel, covering it with wood chips and aerating it, which creates an environment for microbes and essential bacteria.

The body, over a span of about 30 days, is fully transformed into soil, says the company.

The procedure is seen as a more sustainable alternative to cremation, which requires fossil fuels and releases carbon dioxide that pollutes and contributes to climate change.

According to The Seattle Times, Recompose founder Katrina Spade was the first to sign up for the prepayment service.

In 2019, Washington became the first state to legalize the procedure. In California, a bill to legalize human composting passed the Assembly and has been referred to a Senate committee.

The California Catholic Conference has come out against the proposed measure.

“We believe that the ‘transformation’ of the remains would create an emotional distance rather than a reverence for them,” Steve Pehanich, a spokesperson for the California Catholic Conference, told Religion News Service earlier this year. 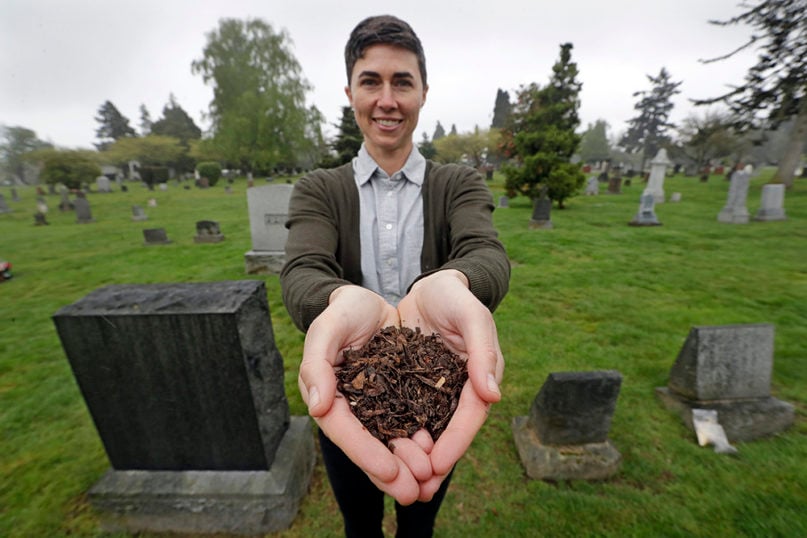 In this April 19, 2019, file photo, Katrina Spade, the founder and CEO of Recompose, a company that hopes to use composting as an alternative to burying or cremating human remains, poses for a photo in a cemetery in Seattle, as she displays a sample of compost material left from the decomposition of a cow using a combination of wood chips, alfalfa and straw. (AP Photo/Elaine Thompson, File)

Recompose has also experienced a few setbacks due to COVID-19, according to The Seattle Times.

Recompose had to cancel plans to open its first flagship space in an 18,500-square-foot warehouse, according to the paper. Recompose has since found a smaller location that holds 10 vessels and no public gathering space, the newspaper reported.

Spade told The Seattle Times: “It’s a place where plants are started,” she said. “It’s where things germinate, and where you figure out what works.”