A Silicon Valley venture capitalist says that men who take six months of paternity leave are ‘losers’ and that ‘in the old days men had babies and worked harder to provide for their future’ which was ‘the correct masculine response.’

Joe Lonsdale weighed into the raging debate sparked by Transportation Secretary Pete Buttigieg’s decision to take paternity leave after he and his husband, Chasten, welcomed adopted twins into their family.

Buttigieg was criticized for taking paid time off while the country continues to suffer from the effects of a major logjam at ports that has exacerbated the supply chain crisis.

Buttigieg, 39, has been on paid leave since mid-August to spend time with his family. 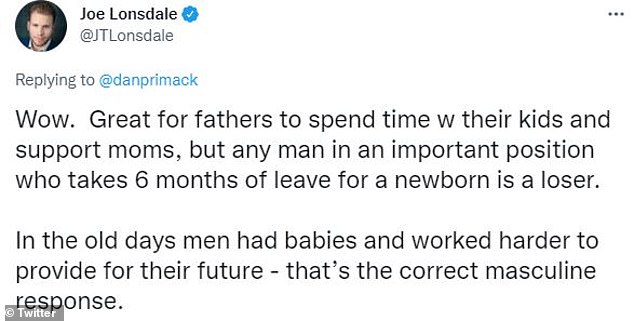 Lonsdale, a co-founder of global software giant Palantir Technologies and current managing partner of 8VC, was reacting on Wednesday to a segment on Joe Rogan’s podcast, which is streamed daily on Spotify.

Rogan agreed with Lonsdale’s view that men should not be entitled to paid time off to spend with their newborn children.

‘This idea that both parents should get maternity and paternity leave at the same time is a little weird,’ Rogan, the host of the popular Spotify podcast, said.

Phetasy disagreed, saying that her relatives in Germany were given significant time off to spend with their newborn.

‘That’s great. You wanna live in Germany? Because in America you gotta work,’ Rogan replied.