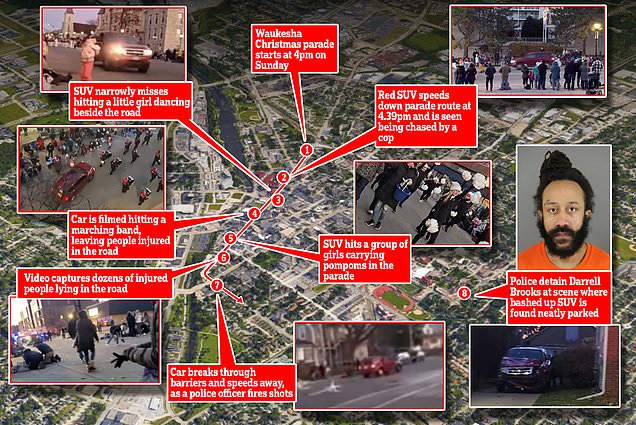 At least five people are dead and 40 have been injured after an SUV was driven through a Christmas parade in suburban Wisconsin on Sunday, with one man now in custody,

The horror began at 4.39pm on East Main Street in the town of Waukesha, 20 miles outside of Milwaukee, when a red Ford Escape was captured on camera barreling towards parade crowds as cops gave chase.

Moments later the vehicle slammed into the back of marchers, barely pausing before ramming its way down three packed city blocks and leaving injured people scattered in its wake.

The SUV then smashed through barriers partially blocking the parade route, dodging a cop who fired his handgun at the driver before disappearing. The vehicle was then recovered some time later on a street less than a mile from the scene, with police saying that a ‘person of interest’ had been detained.

That man has now been identified as Darrell Brooks Jr, 39, from Milwaukee. Social media profiles reveal he is an amateur rapper, while court documents show he has a lengthy criminal history and had two open felony cases against him at the time of the rampage.