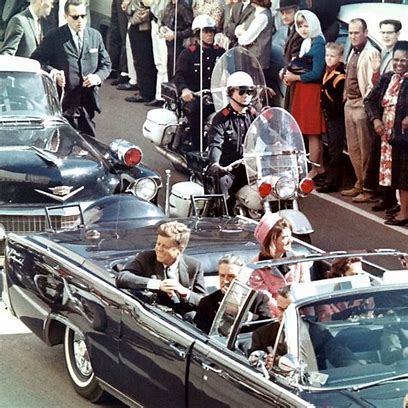 On Nov. 22, Showtime will broadcast Oliver Stone’s new documentary, “JFK Revisited: Through the Looking Glass,” in which the director makes an on-screen pilgrimage to Dealey Plaza. Earlier this month, a faction of adherents to the extremist ideology QAnon descended on the same site in the vain hope that John F. Kennedy and his son would reveal themselves to be alive and ready to right perceived political wrongs by escorting Donald Trump back into the White House. Underlying both pilgrimages was the notion that there are aspects of the Kennedy assassination still hidden, and that those revelations can help us understand and address our current political ills.

Though purportedly based on a preponderance of new evidence, Stone’s documentary treats viewers to a densely detailed, often emphatic, but entirely predictable two-hour argument that will be familiar to anyone who viewed his 1991 feature film “JFK.” These include the idea that Kennedy was killed because Vice President Lyndon B. Johnson and collaborators in the military, defense and intelligence communities sought to profit from a ramped-up war in Vietnam.

The problem with this theory is that it is counterfactual. Despite suggestive evidence of Kennedy’s intention to draw down the number of military advisers in Vietnam, no one can know with certainty whether he would have started an active ground war, as Johnson did. Such thinking fuels conspiracy theories with an entirely unprovable assertion about what might have been.

Despite the impressive depth of assassination-related research published since the mid-1960s, most writers and documentarians continue to focus deeply on a relatively narrow set of questions, including whether Lee Harvey Oswald acted as a lone assassin or if a conspiracy lay behind the president’s murder. The question, which has been asked, answered, debated and repeated time and again, is also re-adjudicated in “JFK Revisited.”

Blurring the lines between fact, fiction and pure speculation, the film also distorts our understanding of the historical record, one that is incredibly well documented. In the wake of the President John F. Kennedy Assassination Records Collection Act of 1992 – federal legislation that was spurred by the compelling but largely unverifiable theories Stone presented in “JFK” – Congress created an independent body called the Assassination Records Review Board (ARRB). Over four years, its members reviewed and then succeeded in prying more than 60,000 documents from federal intelligence agencies, declassifying and making them available to researchers at the National Archives facility in Maryland. Today, the JFK Records Act exceeds 5 million documents of various types.