Design a site like this with WordPress.com
Get started
Skip to content
glmglsmirrorsites2 Christian, zTransfer-ICH, zTransfer-UCN May 19, 2022May 19, 2022 1 Minute 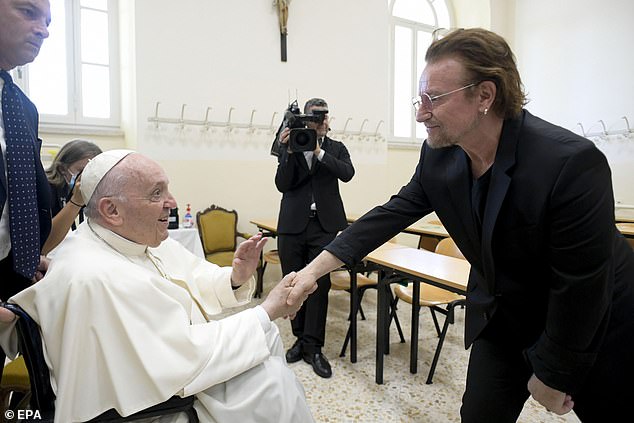 U2 frontman Bono Vox and a wheelchair-bound Pope Francis launched a women’s education foundation together in Rome on Thursday.

Bono, 62, and the 85-year-pope shared a platform organised by Scholas Occurrentes, Latin for ‘Schools of Meeting’, a worldwide network of schools promoting educational opportunities.

The Pope inaugurated the Scholas Occurrentes International Educational Movement on May 19 during a meeting with young people in Italy’s capital.

The event took place on Thursday evening at the Pontifical Urban University, called the Urbaniana, which lies within walking distance of St Peter’s Square.

‘Girls’ education is a superpower to fight extreme poverty and I would like to ask His Holiness if you think that women and girls have the same important role to change the world and climate change,’ said the Dubliner.

Francis answered yes, saying ‘we speak of Mother Earth, not Father Earth,’ with a smile that earned him applause.

The Pope was seen using a wheelchair in public for the first time in early May, days after he said he was having treatment for knee pain.

The young students welcomed the pope with a show of chants and recitals based around the theme of protecting the environment.

‘We need poetry and courage to care for our common home, we must defend the harmony of creation and women know more about harmony than we men do,’ said Francis.

Scholas Occurrentes started as an education project created for children in impoverished areas in Buenos Aires, at the initiative of the then-Cardinal Jorge Mario Bergoglio, now Pope Francis.